Hello, and welcome to the new and improved online home of Publishing Genius. The update was past due, and when the site started crashing a lot I knew I had to steal some time to fix it up.

If you’re interested, the Wayback Machine can show you what PublishingGenius.com looked like throughout the press’s history. Here’s the first iteration of the site, from 2006: 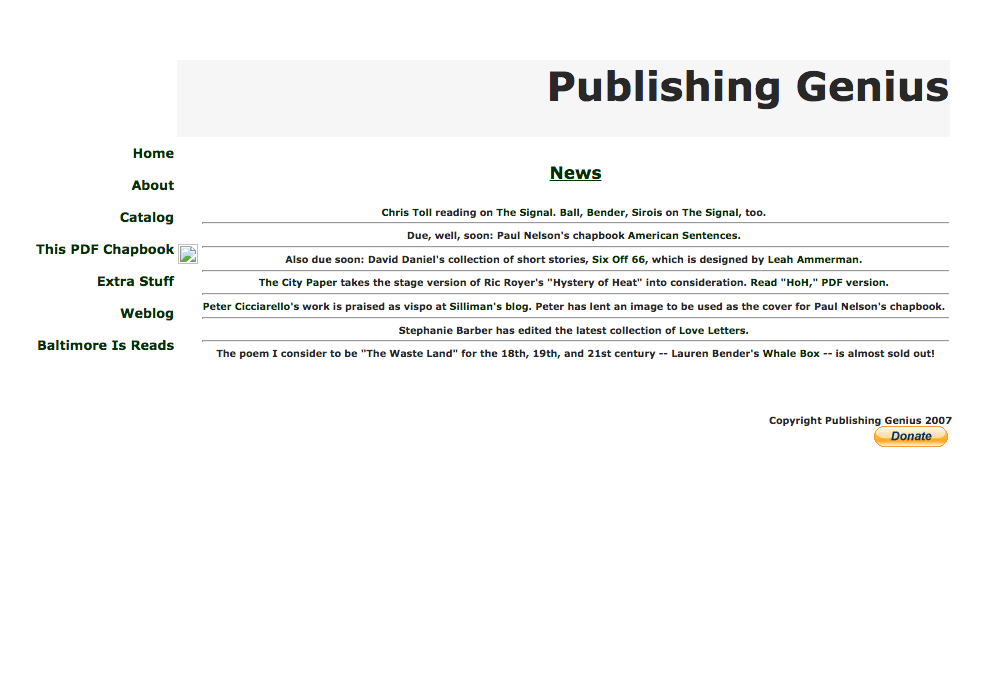 There was even a Weblog!

That was coded in HTML. Pretty amazing, right? Do you ever miss Verdana?

Things have come a long way since then. Over the weekend I installed the first ever Publishing Genius SSL certificate. An SSL cert is for security—it encrypts the communication between your computer and the PGP server. See that green padlock in the URL bar (if you’re using Google Chrome)? That means everything’s locked down.

Here’s some other stuff about the new site that might be interesting to people who like to look behind the scenes. I’m not a developer and only a beginning “designer,” whatever that means, but here’s some notes:

Coming soon, Nick Sweeney is going to run a “what are you reading lately” feature. We’ll be giving away a very cool (and short, like 4 minutes long) audiobook of Michael Bible’s Simple Machines in the next couple weeks. Probably some other surprises too. Stay tuned via Twitter to see how long we can actually keep this up for.

And  till August 26, you can use the discount code BEAR-Y CHEAP and preorder The Well-Dressed Bear Will (Never) Be Found our next book, a graphic novel from Jarod Roselló, for $5 off!