Here’s a picture of me shaking hands with Guy Benjamin Brookshire, author of The Universe War. We were onstage in Athens, GA.

In July, I went on a five city tour with Matt Cook to support the release of Proving Nothing to Anyone. We went to Boston, Amherst, Philly, Baltimore and Brooklyn. We had a pretty great time, with many highlights and many jokes. I was the driver. Matt read in a Scottish bar in Boston, at Flying Object in western Mass, a dive bar called “The Dive” in Philadelphia, a converted bodega in Baltimore and, in Brooklyn, to a packed house at Mellow Pages.

I kept meaning to post about the trip but never did and now I’ve forgotten most of the jokes.

Before that happens again, having returned two days ago from a tour to push Edward Mullany’s book, Figures for an Apocalypse, and John Dermot Woods’s book, Activities, I’m committing some details to blogsterity.

Edward’s book comes out in December, but it’s available to readers of this website now. Order your copy here. John’s book came out at the end of August. It’s a comic book. You can order it here.

We were joined on the road by dapper Guy Benjamin Brookshire (pictured above), whose collage chapbook, The Universe War, lives in color right smack dab here.

Preliminaries out of the way, here are the details: 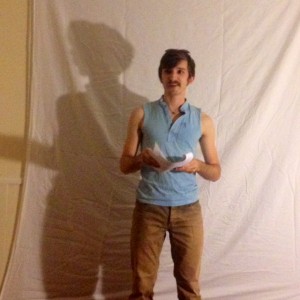 Caleb True reads a story about superpowers, sort of.

Huge thanks to Edward, Anjali and John—the best traveling companions ever!

Here are the lyrics to the theme song:

It’s the Edward, Adam and John show …
We got Edward’s book,
I think that it’s poetry
But take a look,
It might be short stories.

[faster]
And then we got,
Activities
by John Dermot Woods
it’s a comic book
cuz I’m on tour
with Edward and John

It’s the Edward, Adam and John show!
(with Ben!)