It’s nice to have a new book!

We’re excited about Matt Cook’s most recent collection of poems, Irksome Particulars, which just came out this week. Here’s what it looks like: 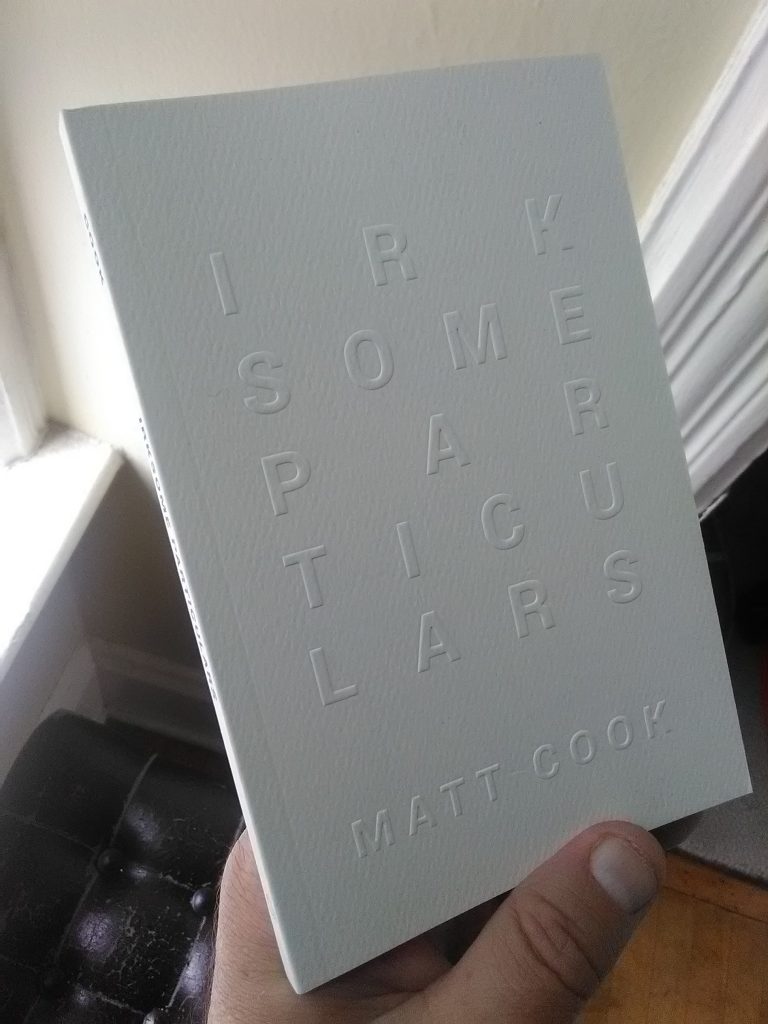 That picture also shows the poet’s own thumb.

As Mike Young said, this book is very cute, in terms of its size. It’s 4×6″, so, small. Pocket sized. After discussing all the ways the book could look, we decided that it should be about the size and shape of the poems inside, which are prose poems about a paragraph long. To gussy it up, we used a soft “laid” paper cover, and had the words embossed into it without any ink. It’s a more expensive process, but it will look nice in your pocket or coffee table.

This is Matt’s fifth collection, so you probably know by now that he was the Poet Laureate of Milwaukee, about which the Milwaukee Record observed kinda funnily, “he’s had as many touchstones of poetry fame as one probably can nowadays.” Forth Magazine called these touchstones a “modern poet’s laundry list of accumulating achievements.”

Some of the achievements are being featured on This American Life, working with Allen Ginsberg, and reading one of his poems in a Nike commercial:

That ad ran during the Winter Olympics in ’98 (I think), making Matt an Olympic poet (I think).

Cook’s last book, Proving Nothing to Anyone, ends with a poem called “Irksome Particulars,” giving some context for the title of the new collection.

When I say, I’m tired and my feet are cold,
And you say, Put on fresh socks and take a nap,
And I say, It’s more complicated than that,
There are irksome particulars to be dealt with—
Well, is that the thanks you get for distorting reality for me?

There’s a beer co-op in town, where you pay annual dues,
And you get a discount on beer, and you put in time helping out at the brewery,
Or on the loading dock or whatever,
And everything is carefully written down, or something like that,
And it all amounts to well intentioned drunks
Trying to remember how much good will everybody owes each other.

On some level we’re all making omnidirectional headway
Tiptoeing through the toothpaste tubes,
Through a kind of golden age of overreaction,
Characterized by frisky and exuberant hand gestures.

I’m glad I met you when I was still an old man.
The love letter lost in the domed waste receptacle—
Is that the thanks I get for distorting reality for you?

The poetry of Irksome Particulars is an introspective collection that reshapes everyday ponderings, relationships, human interactions, the natural world, and so on. Irksome Particulars delivers the poetry style unique to Matt, hailed by David Cross as “straight up funny. And thoughtful. And human.” As Dorothea Lasky puts it, the book “floats weightlessly, despite the weight of its intricacies and gorgeously exquisite language.”

Order This Cool Book
(Big thanks to PGP intern Allison Bolt for helping write this post!)