Three Writers You Should Know 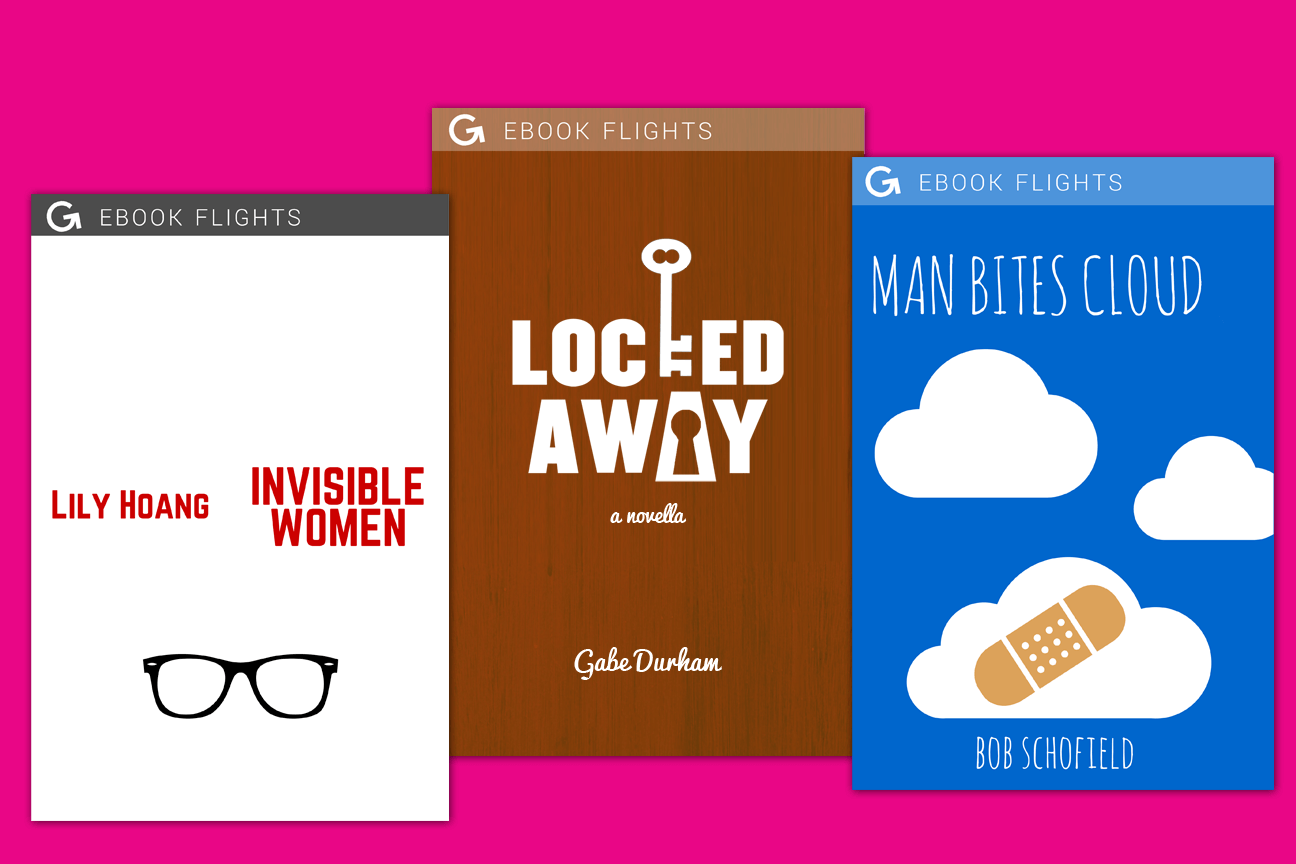 Have you been interested in Publishing Genius’s first series of Ebook Flights? Check out these short interviews with all three authors to find out what inspired their books, what else they’re working on, and maybe their thoughts about our digital futures, too.

Gabe Durham, author of Locked Away

In a land where cellars have just been invented, a new class of criminals—the kidnapper—begins to experiment with locking people inside their cellars. Here, a bean farmer, a fig merchant, and a vicious marauder prove humankind’s capacity for abusing new technologies in this strange world populated by dunderhead criminals, sad old men, and unsocialized children. Locked Away comes from the inimitable imagination of Gabe Durham, who gave us 2013′s hit novel, Fun Camp.

I will never look at cellars again, so thank you for that. What inspired you to write this story? It was 2009 when I began work on this. In my fiction around this time, I was looking to write stories that took place in what I was calling in my head “a pure creative space,” which basically meant: I wanted to be able to do whatever I wanted in a way that was not tied down by specific geography, history, or genre expectations. Something like a fable but without any talking animals, something like fantasy but without any magic. A yarn.

I think the initial concept was as simple as, “People locking people up in cellars.” But what kept me interested in the story was getting to follow around the misuse of what in the story is a new technology. If you hand humans a new technology, they’ll find ways to do terrible things with it. The concept became a vehicle for one of my favorite kinds of writing, which is, “Is this funny or is this terrifying?”

You have your own publishing press, Boss Fight Books, that focuses on getting books out electronically. Where do you see it, and e-publishing as a whole, going?

I don’t necessarily prioritize our ebooks over our paperbacks when I’m working on them, but its true that so far we’ve sold a lot more ebooks than paperbacks. And it’s great, most of all because ebooks make a smaller footprint on our dying world. But its great for ME because it allows Boss Fight to be scrappy the way indie game developers are scrappy: We sell directly, on Amazon, through Kickstarter pre-orders, and in bundles like StoryBundle, and always in multiple formats and DRM-free. On our website, we also offer a paperback/ebook combo of all our books, which a lot of people like. That to me is what feels like the future: generous access, ease of use, and prices that are substantially lower than print prices. It’s great to see Publishing Genius take on that model too.

I just published my first nonfiction book, Bible Adventures, which is about Christian video games of the early 90s.

From here, I’ve got another nonfiction manuscript that I’m almost ready to jump back into. It’s about September 22, 2011. Pieces have been published in The Austin Review, The Weeklings, The Collagist, and Juked, but the full manuscript is big and unwieldy.

My press has become the biggest and most ambitious artistic project in my life so far, which makes writing a challenge at times. It’s worth it, but the amount of time it takes me dwarfs the time devoted to any other work.

Invisible Women is really two books entwined in one, a dialogue between psychoanalysts that weaves through descriptions of luminous women. Told in a specific collective “we,” Hoang’s own voice becomes a compelling part of what’s being told. Just like Italo Calvino wrote of vast buildings constructed of words alone in Invisible Cities, Invisible Women presents complicated stories of feminine archetypes in the form of psychoanalytic case studies.

This is such a fascinating concept for a story, the idea of a conversation and allowing the reader to see where the truth is. What led you to this particular story?

Invisible Women is my feminist appropriation of Italo Calvino’s Invisible Cities. In Calvino, the conversation exists between Kublai Khan and Marco Polo. Polo tells Khan great stories about all the fantastical territories over which he reigns, only for it to be revealed that they are all just one city. I hope Invisible Women is the application of gender to scale against geography.

Do you feel that this poetry has a narrative feel to it? That they are all parts of a bigger whole?

I hope it does! The individual pieces can be read alone—and many of them have been previously published alone—but I hope that accretion yields richer narrative possibilities. At the end of the day, I’m a fiction writer and I care about storytelling. These are very small stories, but I hope they mosaic together enough to form something bigger too.

When you approach a new project, do you have something in mind or do things come to you?

I guess I write a bunch of unrelated stuff, and then after a while (maybe 20, maybe 50, maybe 5 pages?), I look at them and find something that unites them, and that’s the book I write towards.

In Man Bites Cloud, Bob Schofield—illustrator and author of The Inevitable June (tNY Press 2014)—offers 60 prose poem fables. There are wolves on the moon, cannibalistic flowers, horses the size of planets, and magicians anonymous. All of these otherworldly characters come together to shed light on brief moments, but nothing here makes for revelations as much as new questions. Schofield brings us closer to seeing the veiled line between fantasy and reality. Like all fantasy—like that of the worlds behind closed closet doors and adventures stemming from unexpected parties—Schofield shows us there is room for happiness and loneliness, room enough for despair and hope.

When you write poems to put in a collection, do you find yourself intentionally writing a particular theme or mood or do you look back after reading and feel surprised by the roads you take?

A little of both. Since I do a lot of improvising I like to have a loose hierarchy in place. It helps guide me. Mood and theme comes first, and after that’s been established, I explore a bit deeper. I figure out which specific images and motifs I want focus on. I usually like to weave them like “clues” or “landmarks” throughout the longer work. I think patterns like that are great for two reasons. First, I think it makes things more engaging for the reader, something for their brain to chew on. A light bulb goes off, etc. Second, it makes my job a little easier, in that if I feel myself loosing the thread I can just retreat back to some of those preexisting images and themes. So there are definitely surprises, but they exist within the confines and limitations of the larger work.

Do you feel a connection between the words you write and the art you illustrate?

Definitely. My art background is in comics, so I can’t help but view illustrations — especially sequential illustrations — as just another form of writing. Another way to tell a story. And I think my predisposition to black and white art has something to do with how I engage it the same was I do words on a page. And so much of poetry involves spacing, the interplay of the line and blank space, the visual of a poem as it “breathes” on the page. So it’s all one big thing to me, really. It’s all about the way the words are arranged, and then interact with the images. They’re two parts of one holistic thing, but the tension between the two is what makes it interesting. And I think the internet has really opened us up to engage with a combination of text and image in this more fluid way. It’s not weird anymore, it’s just the ocean we’re swimming through.

Do you think more people would read more poetry if it was more accessible via electronic readers?

Almost certainly. The internet is simply overflowing with poetry right now. It’s all over the place. Good stuff. Bad stuff. Everything in between. So there’s definitely an interest in it. People want this stuff, it just needs to not be a total pain in the ass to get it. As it stands now, if you want some small press poetry you’re almost certainly going to have to order it online anyway. So putting more of a focus on ereaders and the ebook format is just the logical next step.