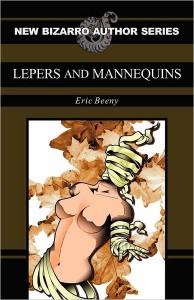 Eric Beeny’s Lepers and Mannequins is a great book, well-written and complete in its rendering. That’s saying a lot, because the story is bizarre and there is a lot to render. It’s about a war that lepers wage on mannequins — for spare parts. Within that war grows a forbidden love story.

Part of the reason it works so well hinges on the structure — it’s balanced and thorough — which is something that seems challenging in fantastical stories.

For instance, there’s a great battle scene at the end where everything is blowing up, and within that, Beeny diverges skillfully to another consideration of Jaundice’s body image problems. (Jaundice is a mannequin who falls for Quall, a leper. At one point they make queasy love.)

But what I like best about the novel, what I always look for and what got me excited reading L&M, was Beeny’s sharp prose. I love the inversions he pulls off. His tone is casual but effective, like when the warring mannequins approach the leper colony. They “didn’t have time to just stand around and wonder what the fuck.” I laughed aloud several times, like when Jaundice thought something had gotten inside her — “Well, there was Quall’s penis to consider.” Very funny. I appreciate the priority Beeny ascribes to the sentence by using extremely short paragraphs. In that way it reminded me of Peter Markus’s book Bob, or Man on Boat.

Generally I am interested in books with more, I don’t know, human concerns. In L&M I kept looking for a parallel, a chink that suggested the story worked as an instructional metaphor, a morality play, so I could invest or insert myself into the plot more. I’m inclined against fiction that defies physics but still seems tied to familiar logic. It’s not that the metaphors aren’t there; they are, as in Quall’s musing on love and his inability to understand the value of fighting. But that didn’t make it easier to deal with talking mannequins.

I mentioned this problem I was having to Eric Beeny, and he responded:

but that is also the essence of the debate between faith and science. . . . The essence of faith is that it cannot be scientifically proven, so, even the term ‘suspension of disbelief’ here is inadvertently given a new context in which to engage itself.

Eric also traced out a bit of the allegorical functions of the novel, and I think, again, his words deserve a blockquote:

I find this particularly true in the love scene between Jaundice and Quall. Jaundice, according to Quall’s and his friends’ perception, is already not human (i.e. female, a stereotypical male position). Even though Quall loves her, even though he’s a good guy, he still attempts to shape her to his liking, carving a piece of her out to place a piece of himself inside—to fill her in with himself, perhaps to make her more human or to subconsciously exert control over her. (This, I think, reflects colonialism—and the many poems by Donne and others about fertile land being metaphorically ‘female,’ meant for men to discover and control.) As a result, he loses part of himself, what a man would consider the most important aspect of his identity: his ‘manhood.’ (This seems also stereotypically male: Taking a virgin and ‘making her a woman,’ as seen in the blood from Jaundice’s first period actually originating from Quall’s severed penis.) So that, in hyperbolically physical terms, reflects an emotional and sacrificial exchange between humans.

Sometimes it’s weird to see an author’s exegesis like that (especially one like that), but in this case I think it augments the reading. And I think it’s nice that even though he’s got it so, uh, fleshed out, he doesn’t attach it to the story like, uh, a second skin. The book reads fluidly, transparently, and provides a lot to think about, and that is the best kind.