Megan McShea thinks about her new book and some old ones. Discussed: Chris Toll, Pablo Neruda, bookstores, Emily Dickinson, and her writing style. 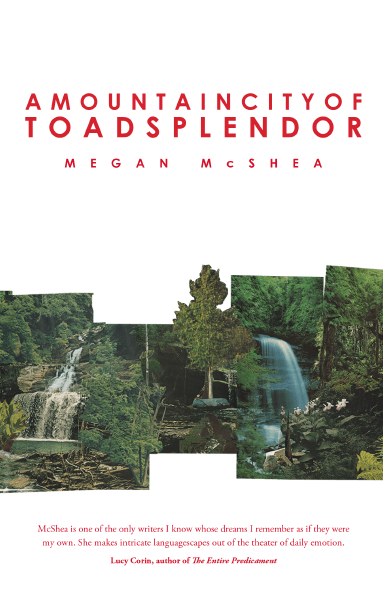 It’s a few months before this book is supposed to come out, and I’ve just been at a residency where I tell the other residents, yes, I have this book coming out. It’s my first book published by someone other than myself, I say. I think that is a funny self-deprecating statement, but after I say it I realize from the way it hangs there that it might be more fraught than it is funny.

On the way home from the residency, I stop in a city known for its bookstores. I find one easily, a great one. A temple of books. It’s busy there on a rainy Saturday. The owners welcome me, even make sure I know the poetry section continues at the back of the store. I browse and browse, preparing myself for re-entry after two weeks of perfect seclusion, and also completely waterlogged with grief after finding out the night before about the sudden death of my friend, the poet Chris Toll, who recently proofread this book I have coming out. I was on my way home and stopped in this bookstore hoping, I think, that it would be some sort of mind-spa for re-setting myself after all that.

So I am in that zone of really seeing every spine, you know? Making connections and remembering things I wanted to look for, and I’m just taking my time even though I’m running late to crash at a friend’s place that night, four hours drive away. I come across a little volume from FSG, a bilingual edition of Pablo Neruda’s Nobel acceptance speech. I notice it because it’s called Toward the Splendid City, which is enough like the title of my book, “A Mountain City of Toad Splendor,” for me to notice. I also notice it because of its color. It’s saffron. The title is close enough and the color is holy enough and I am wired enough for this find to feel like sparkly kismet. I usually eschew that kind of magical thinking, but whenever someone I know dies, the floodgates of mysticism are suddenly uncontrollably open. The night before, right when I got the news, I was outside and looked up and saw a cloud shaped like a giant squid pass over the full moon and took it to be an indecipherable message from the other side. Then I went back to my cabin and opened up Emily Dickinson at random to “This World Is Not Conclusion.” In the bookstore I was still ardently looking for messages.
http://youtu.be/wEY9Fp6L35o
So I bought it. (I also bought In the Future Perfect by Walter Abish off the clearance table, which I am currently enjoying in all its euro-urbane-macho finery.) Neruda’s title, it turns out, is from a line by Rimbaud: “A l’aurore, armés d’une ardente patience, nous entrerons aux splendides Villes,” which Neruda translates as “In the dawn, armed with a burning patience, we shall enter the splendid Cities.”
I didn’t know about this speech or the Rimbaud line when I wrote the words “a mountain city of toad splendor” in a musical transcription that would later become the poem “Crap Collapse on the Slow Channel.” Any connection I could draw between my line and the Rimbaud line or Neruda’s highlighting of that line seemed tenuous, but like I said, I was looking for signs.

Back when I handed the manuscript off for PGP’s consideration, I was calling it “Lonesome Machine” because it was January and I was lonely, and the book documented many of the lonesomest times of my recent years in a way that seemed to rise to the surface when I brought it all together. But then Adam read it and we started talking titles and he grabbed a bunch of lines from different places and finally said, “it might be a real shame if we don’t name this collection A Mountain City of Toad Splendor.”

When I got home from my trip, after the tide of emotion from Chris’s funeral had ebbed a little, I finally sat down to read Toward the Splendid City. I was feeling really serious about poetry at this point, because Chris was a poet and then he died all the sudden, leaving us grasping at all his poems and having uncanny and mystical encounters with them, and it was terrible but it was also elevating in a palpable way. So I was in this heightened state; this dead friend had dared me to believe in poetry, and then this book came to me in that far away city in the mountains, this pretty little book by one of the greats that took its title from a line by another one of the greats, a line my own title will echo unintentionally, unless you can retroactively intend things. Call it a precognition, maybe? Chris would probably attribute it to aliens. In any event, given all that was happening I was completely open to what it might have to tell me, and I expected it to tell me something important.

The speech is a poet’s formational journey story. Neruda talks about his 1949 escape from Chile across the mountains, the help he got from people who guided him, the sights he encountered, and the shelter and company he enjoyed on the way amidst a terrible uncertainty and deprivation. He uses the story to convey his idea of the poet’s place in the world, a place of solitude and uncertainty but at the same time a place of connectedness that would not feel the way it did or happen the way it did if it weren’t for the solitude and uncertainty.

I won’t recount the whole thing here, but it’s quite beautiful as you might expect. It turns out you can read it online here. Reading it I felt newly willing to admit to intentions and wishes and beliefs, not so much about my writing, but about wanting to share it. I write in an improvisational way, so it can sometimes seem to be lacking in intention. However much that may be, the act of bringing it out is, I’ll admit, entirely purposeful. It’s strange, new territory.