Sort of Like the Ocean: Jane Wang interviews Joseph Riippi 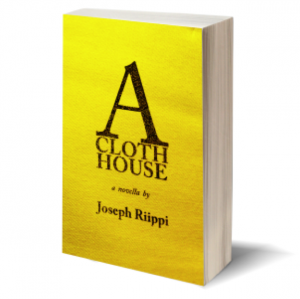 Editor’s note: Joseph Riippi’s latest novella, A Cloth House, came out a few months ago from Housefire. It’s a unique book in an indie press world filled with unique books; it’s affective and disarming and sonorous. Sarah Rose Etter said, “Simply put, A Cloth House will break your heart.” A couple months ago I gave Jane Wang, PGP intern extraordinaire, a copy of A Cloth House and asked her what she thought. Thorough to a point, she responded with this interview with Joseph Riippi. They talk a lot about the heart, and finding a story, and what it means to remember something.

(Further note! This is the first installment of PGP Features, which is slated to be the coolest batch of reviews, interviews, articles and odds & ends, all hosted right here at Publishing Genius’s website. Thanks to Jane and Joe for the kickoff.)

Did you do anything special to sink into the perspective of a female narrative? I actually checked the cover of the book twice for your name, certain that the author would be female. Do you think that, in writing, female and male perspectives can be similar just because we’re both human beings or did you consciously shift some paradigms?

That the book is narrated by a woman, or rather that I am a man writing in a woman’s voice—I didn’t really think about it until I was done with the bulk and just tinkering with adverbs and languagey bits. To me, the story has always been about memory. That’s what I sought to write, how, by choosing to remember something a certain way—by retelling our stories a bit differently each time—we can change something “real” into a something else. In terms of what “story” that something would be, I wanted to write about a Big-Hearted Mother, and I wanted to write about an island of pine trees. It seemed like a nice place to spend some pages.

Also, I had just written a book of stories called The Orange Suitcase that, for the most part, was a collection of retellings of memories. A boy and his grandfather, a boy shooting BB guns, a boy falling in love with a girl, etc. I’d written enough stories about boys and their fathers. I wanted to write a story about a girl redeeming her mother. It was just more interesting to me.

This story reads very organic. There are no mythical creatures (although the family members are spoken of in such detached tones sometimes that they feel mythical) or magical powers. How did you decide upon the narrator’s life events? Are any drawn from personal experience?

I wrote A Cloth House very quickly, so I think that helps keep the narrative “organic,” as you say, and I’m glad it does. I think I started to answer a bit about the plot above—when you do the bulk of your writing at a kitchen table in Manhattan, it’s nice to escape to the memory of a beach-island that smells of pine trees and ocean. Write a bit in the morning, and puddles on your walk to work turn to tidal pools of crabs with tiny fish. Trash turns to kelp, police sirens to seagulls, trees from the sidewalk become sprays from whales’ blowholes.

The actual plot points of narrative did not—thankfully—come from direct personal experience. However, and this has to do with writing toward a perspective as opposed to from it, the stuff of the heart in this book is all very personal. Did my little sister die as a baby? Not at all, my little sister lives in West Seattle. But have I lost someone I loved and tried to remember it differently every day since? Absolutely. I think most of us have.

Is family a very resonant theme for you? You mentioned that you’ve already quite thoroughly explored father-son relations. Are there any other ideas/character personalities/themes that you find you’re partial to?

Memory is a very resonant theme for me, and most of my memories are of family. I’m obsessed with the idea that I might be remembering my life completely wrong. I believe I grew up in a house on a hill overlooking a valley because I remember. I remember throwing pinecones and climbing sticky trees. I remember a dog and a sister and an orange bicycle I broke in a crash. I remember a neighbor boy whose father abandoned the family in a note on the station wagon windshield.

I want to write stories like the nail one. I want to be remembered in stories like that. It doesn’t matter if they really happened, not to the person remembering. That memory of my grandfather hammering a nail with his bare hand is a great treasure to me. And it’s fiction.

If you could pick out the line that most resonates with you from A Cloth House, what would it be, why is that, and did it come spontaneously or did you spend much time working out?

I love that you gave such specific insights into your writing process. It sounds like writing is definitely part of all your daily activities. In some ways, that’s true for all writers, I think. However, do you have any more specific writing goals? For example, Sarah Waters, Jean Plaidy, and others all force themselves to write a certain amount of words each day.

Lately I’ve been waking early. That’s what I’d like to say. The truth is, lately, I’ve been writing scattered sentences on my phone’s memo function in the middle of the night when suddenly I sit up because I wrote a paragraph in my head trying to sleep. I used to write for at least two hours, five nights a week. The problem was, I didn’t have anything to say. I wrote a very horrible novel that, thankfully, I recognized as horrible. Later, in The Orange Suitcase, that novel became a short story of about a hundred words. Turns out that was all it needed to be, some sentences written on a phone, lately. Now I write only when I have something to write. My goal is a sentence a day, something a day. I try to give myself a chance everyday. Eventually I’ll hit a ten-hour binge and make something of substance.

Are there any specific new projects for you that are coming down the tube or are you moreso sifting through the brainstorms that hit you late at night?

There are always the midnight brainrains. But aside from that are a couple projects in states of done-ness. The first is called Research: A Novel for Performance. It’s a side-by-side translation of an off-off-broadway play that ran briefly last year and a prose version of the same. I’d written a short version of the play in prose first, to pitch to the production company a couple years ago. Then, after the play ran, I wanted to see if I could get back to that kind of prose I liked and translated the full length of the play from script. There was a surprising tension between the two forms I hadn’t expected, and when they’re places side by side, well, I hope people will like it. That’s done and with my agent and (hopefully) soon to be placed with a publisher.

The second project is a short novel called Because which I wrote very fast and love, love, love. I’m doing final edits before sending out, but wow I love this book. I feel like I got to the heart of something.

Have you noticed in any specific way that writing for a living has changed the way you see the world?

I don’t feel like I really write for a living. I feel like I present ad campaigns for a living and write between presentations. Maybe because that’s because presenting is the more difficult part and so it’s the part I spend most of my day thinking about. But this is a tough question because I’ve never done anything else for a living but write, so I don’t have a control against which to compare. In high school and college I had jobs that weren’t writing (but even in both those places I wrote for newspapers) so writing has always been there. Hopefully always will be.