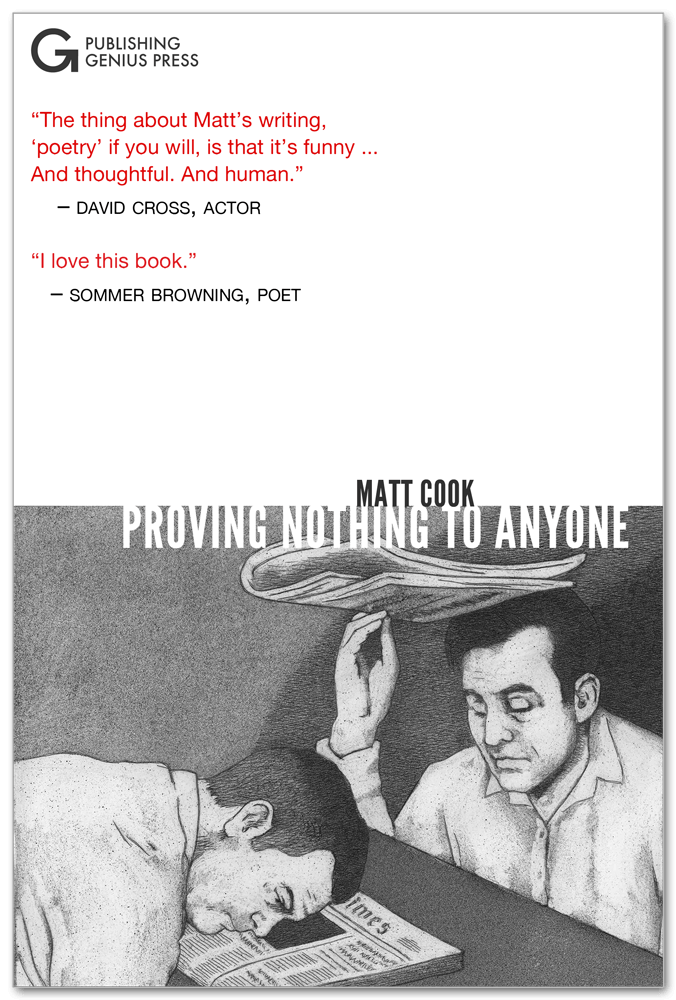 Matt Cook, author of Proving Nothing to Anyone (PGP 2013) and three other collections of poetry from Manic D Press, was recently announced to be the next Poet Laureate of Milwaukee.

That the award is given out in Milwaukee might sound like a joke, but when I lived there for five years (which was where I was first turned on to Matt’s wonderful style of writing and reading), I realized that it’s a city that takes poetry and art seriously—but in a fun, communal way. Woodland Pattern is there, and it’s an amazing backbone of the national small press world, with thousands of chapbooks and small press titles. And of readings that happen in bars—whether it’s a corner bar or the pristine stage at Linneman’s (which is the same thing), or the weird couches at Y-Not—Milwaukee’s are unique because they are attended as frequently, and appreciated as much, by people who just happen to be there for the Blatz as they are by the poetry set.

I think Matt Cook’s a big reason for this. You can’t not enjoy poetry when he’s at the mic. So it’s exciting that he’s been given this title.

The award was started in 2000 and is run by the Milwaukee Public Library—the central branch of which is one of the best libraries I’ve ever been in. You can find out more about the award in this article at the Journal-Sentinel announcing Matt Cook’s appointment.

To participate in the celebration, Publishing Genius is offering Proving Nothing to Anyone for just $10. Click here to take advantage of the deal.

Here’s a video of Matt performing his poem, “James Joyce” in the nineties.