Keith Nathan Brown’s “Booty Call of the Psyche”: An interview 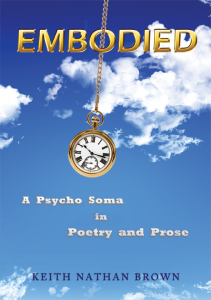 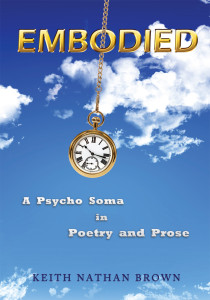 Keith Nathan Brown’s book, Embodied (Sententia Books, May 2012), is as remarkable for its variety as it is for its exactitude. As the interview below shows, he is precise, and he’s as interested in physics as much as he seems ambivalent about literature. Therefore, his own writing is marked most by its original and distinctive thinking, its attempts to fill some void. Voids and spaces are a defining characteristic. For instance, check out “The Tongue” in Elimae. In a recent conversation at HTMLGiant, David Peak started by saying “his pieces are often instantly recognizable as having been penned by Keith Nathan Brown, yet remaining distinct from one another in the ways that really matter: in tone, in form, in subject.”

If you put a copy of Embodied in your hands and flip through its pages, all of that will be made instantly clear. The workbook-sized paperback is full of language charts and diagrams and concrete poetry, as well as the more traditionally-shaped short stories. I asked him about making the book, and about some personal stuff that undoubtedly influences the way he thinks about everything.

What did you think when you opened the box and first saw your book?
As my grandfather used to say, It is a thing of beauty.

What were some of your early writing experiences—not necessarily in terms of this book, but writing in general. I ask because you seem to have a number of different tones at your employ, and vastly different genres, so I’m wondering what was your starting point for writing?
Despised writing. Always did. The written word caused my brain to hemorrhage—still does occasionally. Journaling was my first encounter—inspired by a hitchhiking trip across Colorado after my first year of college. Less than a year before, the first signs of lifelong health issues. Less than a year later, confined to my dorm room, staring at the wall for hours on end, slipping in and out of hypnogogic states as a way to pass the time—immobilized by poor health, paralyzed by general anxiety, lobotomized by increasing dissociation and inability to process symbolic information. One night I spontaneously wrote something that happened to rhyme. It engaged a vital part of my brain that served as some sort of pressure release valve. Yet, I still preferred to refrain from writing, except when absolutely compelled, due to how uncomfortable it made me feel. So began my strange, ambivalent, codependent relationship with words—once a harmless booty call of the psyche, now a mobile-home-park baby daddy of a brainchild.


“Booty call of the psyche” is an amazing phrase. Are you still in this ambivalent relationship with words?
The ambivalence has been THE defining trait of my relationship with words—until recently, that is.  For a variety of reasons, a minor shift has occurred, and I find myself away from words, watching words from afar.  Words, I call out.  Words, come here, I say.  Be careful.  Stop playing in the street.  Don’t put that dog poop in your mouth.  But Words remains beyond my grasp.  All I want to do is hold Words in my arms and snuggle and cuddle.  Come here, I say, laughing at the infectious of giggle of Words, but, to my aging dismay, I suddenly discover that Words has a nose piercing and wears angry black eyeliner and blames me for its acne.  And even after Words demands the car keys and says adios with a salute of the middle finger, what else can I do but call out, Be careful, and, I love you.  For I know, if anything should happen to these Words, I would be lost without them.

So you were in college when you were diagnosed—with what, may I ask?
To this day, after over a dozen neurologists, psychiatrists and gastroenterologists, I remain undiagnosed with progressive muscular and digestive issues complicated by somatic and psychological hypersensitivities. However, college was the situational fulcrum upon which dormant propensities became activated/exacerbated by hard liquor binges to cope with stress and distress. Although, that’s not quite accurate, before my stomach began rejecting a spectrum of food substances, my true aspiration was to become a bar stool drunk. When that failed, I decided to give physics a shot. That’s when things got bad.


How did you decide what to include in Embodied? Did you start with the concept of the book, or did you start with what writing you already had out there and fit that into the concept?
Embodied crystallized as a project, and evolved over the past eight years, when I noticed connections among various pieces of my writing. I began outlining sets and subsets of inter-related pieces. Making connections is a compulsion of mine. Very little of the original manuscript (entitled “From Such Space of Vinylness,” intended to simulate the two sides of a record) remains in Embodied other than the conceptual impulse of schematic-like relations among autobiographical nodes (gratuitously injected with a hefty dose of fiction growth hormone).

The different pieces in the collection are very different—from each other, and also different from what I read in other books (of course). But let’s stick to the first difference. Does it take a degree in Physics to put a story called “Banana Slug in Post Global Warming Sauce” in the same collection as “Oval Banzyard” with a WTF like “Fern Canyon”?
“Oval Banzyard” portrays an ageless being with childlike naivete. The animistic kaleidoscopic flux of childhood sense-perception shares overlapping similarities to psychoactively altered cognition, a point which “Fern Canyon” explores as its theme. Altered cognition, if prolonged, equilibrates and becomes the new norm, much in the same way that the techno-dystopia of “Banana Slug in Post Global Warming Sauce” is simply the humdrum of everyday life to those born into such conditions. Exploring ways of seeing, bringing awareness to one’s own interpretive lens or framework, is one of the projects of Embodied. Each piece uses a different mode of literature toward that end, but the themes generally orbit in the same psycho-temporal fringe that haloes a somatic existence.


What was your process for the concrete poems, like “The Tongue”? Did you write the words first, then move the letters around?
The visual pieces were borne out of an acute awareness of my awkwardness with language. If I couldn’t use language competently enough to convey certain ideas or experiences (often of the phenomenological variety), then I resigned myself to merely pushing language around on the white space to forge collusions of signification. Or that is to say—pretty patterns.


“Author Bio For Sale,” which starts the book, is hilarious but also kind of profoundly miserable in the way you describe the author’s condition—your condition, since you name yourself from the get-go—with “30 years of regrets or 3000 existential crises” and an “insecurity system” and “extensive damage to body.” How does your body influence your writing?
Physical debility certainly defines my present-day existence, yet cognitive/psychiatric issues (surfacing comorbidly with the former in my late teens) dominated early on, hence the existential crises, insecurity system, etc. As a result of physical illness, though, my own body slowly became a body, something foreign to me, a roommate in my residing-here (along with my other roommate, the mind), and this dual awareness of self-as-other in a convergence-of-being cohabitated by a body, the mind, and something else, something resembling Keith-ness but only nominally so, has challenged my general sense of identity and made myself subject to, or as it were an object of, constant defamiliarization. Investigations of this sort permeate much of my writing.

Regarding humor, when it comes to misery my motto is: Laugh together, cry alone. The latter preferably in a dark room watching Mister Rogers’ Neighborhood. For he will never judge you, not for being a social outcast, a helpless cripple, or an overall failure in life. You are special. No matter who you are. Sometimes hearing that can make a big difference—especially to someone in the throes of a nervous breakdown.