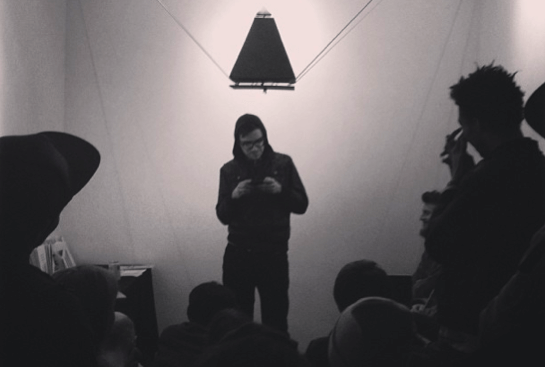 Guillaume Morissette is the author of I Am My Own Betrayal (Maison Kasini, 2012) and the forthcoming novel New Tab (Vehicule Press, 2014). He makes charts, writes fiction and poetry, and has a never-ending supply of sort-of-serious-but-sometimes-light-hearted cynicism and despair.

His work has appeared in Maisonneuve Magazine, carte-blanche, Little Brother Magazine, Metazen, ThoughtCatalog, HTMLGiant and many other publications. He lives in Montreal.

Guillaume talks with me about his forthcoming novel, anxiety levels and the common ties between literature and video games.

What are you excited for this week in your personal life, and what is something in literature that you are currently inspired by?

I just started reading I’m Trying To Reach You by Barbara Browning. It’s written in a straightforward, casual manner, and it’s about performance art, YouTube, the blurring of art and life, the death of Michael Jackson, academic writing, lurking, other things. I like it a lot so far. I only googled it after it was nominated for a Believer thing, but then I read four sentences from the Amazon preview and immediately thought something like, “Add to cart.”

In my personal life, I haven’t been particularly “excited” about things lately. I am currently in a weird transitional period in which I keep wondering if I should dynamite my life or not. But confusion is also often a good teacher for me, so in a way I guess I am “excited” to be confused right now. 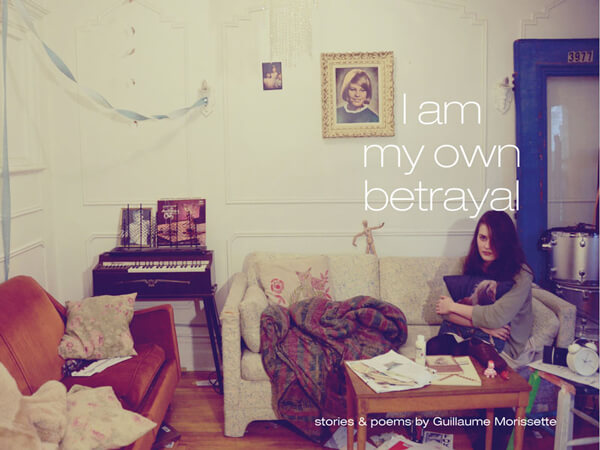 Your first book, I Am My Own Betrayal, was published through Maison Kasini in 2012. Your new novel, currently titled New Tab has recently been picked up for publication by Véhicule Press in 2014. CONGRATULATIONS! This is great. When did you start writing New Tab? Did you feel good about the story straight away? Did the novel change directions throughout the writing process many times?

Thank you. The very first iteration of New Tab was probably a short story that I wrote in the Summer of 2010, which was a period of desperate partying and quiet personal reinvention for me. I showed that story to a few people, but for the most part never did anything with it. Then a few months later, I looked back at it and felt ashamed even though I hadn’t published it anywhere, and thought things like, “Damn, most of this is really bad, who wrote this, oh right.” In 2011, I re-wrote the story from scratch, keeping only five or six lines from the original, greatly expanding it, transforming the plot, adding stuff, etc. Then I submitted the re-written story to a workshop I was taking and the reaction was mostly hostile, which was something I hadn’t anticipated.

The third draft surprised me, in that the word count kind of exploded, like a part that was maybe 500 words in the second draft was now 5000 words, and I accepted that the material was heading towards a much longer form than a short story. I still wasn’t satisfied with the tone and structure, so I spent another six months of just writing and re-writing the same things in different ways, like past tense, future tense, third person, second person, making the tone more poetic, then more direct, etc. I trusted my intuition. One day, I looked at what I was had, and it was like, “Oh, wait, I actually feel really good about this now.”

In the end, New Tab doesn’t resemble the 2011 and 2010 stories in content or tone very much, but it’s possible that a few lines survived, and are now “haunting” the final manuscript maybe. 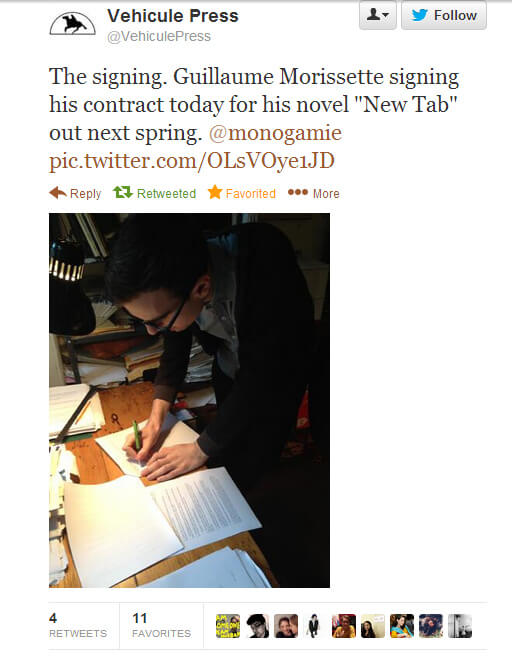 What was your process like in finding a publisher for New Tab? Did having one previously published book make things easier, more difficult, or no difference at all?

No difference, I think. I don’t have an agent, so I targeted presses of different sizes and did my best to point out my credentials and past accomplishments. I felt like all I needed to do was to put my manuscript in front of the right eyeballs, but then that’s so much more difficult than it sounds.

You used to work as a video game designer before quitting your job to pursue literature. Do you see a relationship in the story lines between the two separate cultures of video games and literature? Are any of your pieces based off of or inspired by the time you spent working there? What are you favorite kinds of video games?

Videogames and poems have more in common than they think they do. In general, they both tend to take themselves seriously, without caring whether or not the player/reader will be accepting them on those terms. I am thinking of something like the story mode in pretty much any given Call of Duty, where part of the pleasure comes from making fun of the game as you play it, for taking itself so seriously. I sometimes experience a similar kind of disconnect when reading poems, between the emotional landscape of the poem and my emotional landscape while reading it.

I don’t play videogames that much anymore, but I am still interested in games with a strong authorial voice, so things like The Witness by Jonathan Blow. I also frequently use videogames as a subject matter in my work. There’s a story in my first book in which the plot revolves around working in the videogames industry, which I talked about here, and New Tab contains videogame stuff as well.

In an interview you did last year, you mentioned that the decision to leave video game designing and enter the Creative Writing program at Concordia was ‘a very lonely decision.’ To me, it seems that it was a very good decision. I have had a nice time reading your poems and stories.

Thank you. It was “a very lonely decision” in the sense that I didn’t consult anyone before taking it. My mother tongue is French, and I only switched to English as my primary language after starting creative writing at Concordia, so at the time, I wasn’t sure I could do this, become a writer in English. I decided to go for it, thinking I would rather fail spectacularly than maintain the status quo, and now I feel like I owe my current mental health to that decision. 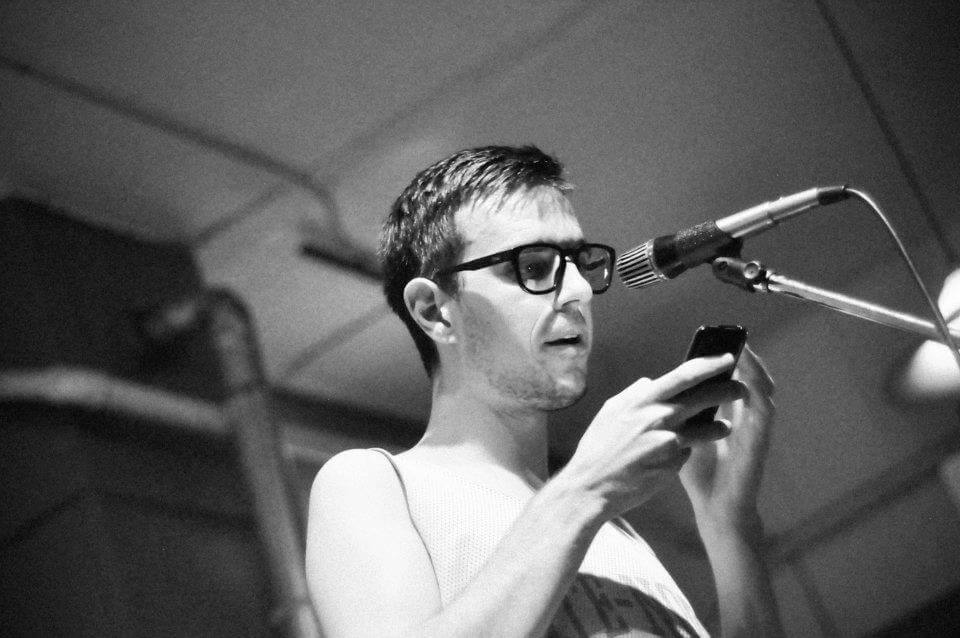 You run a reading series called This Is Happening Whether You Like It Or Not with Ashley Opheim in Montreal. I like how Ashley is especially great at mashing together intense dreaminess with obvious reality. I like this excerpt from a poem of hers titled ‘Plural Realities‘:

a rainbow is not a physical object and cannot be physically approached.

we came so close something closed between us.
how you moved me!
i am in outer space now, thank you.
i am here in outer space, it’s fucking beautiful.
i am radiating out of my constellation.
i am on mars making hologram sand angels.
i am making a perfect shape here with or without you.

‘things only appear to be, but they are mere impressions,’ you say.
‘fuck your skepticism, let me make you feel different.’

‘everything was beautiful and funny, there was a golf course right beside the cemetery and it was really sunny.’

‘our bodies are the soil where our brains are planted.’
‘i am an infinite ball of love.’
‘come be on mars with me.’
‘come spread these dead seeds on this dead land.’

What do you think about it?

I have a close friendship with Ashley and think of her as maybe my personal rainbow or something. My anxiety level when I am around Ashley is usually something like minus four thousand. I find it very helpful to have someone in my personal life who completely and without judgment understands what I am trying to accomplish and is supportive of it. Unlike me, she’s very positive and likes to look for the magical within things/people, so we have different personalities, but we have a weird way of complementing one another.

I obviously also really like Ashley’s work, and I am hoping that New Tab allows me to give her opportunities for additional exposure, like readings or whatever. I don’t know if I want to comment on the poem above specifically, I just feel confident that Ashley has within her a poetry book that’s compelling and entertaining and completely different from anything else that’s out there.