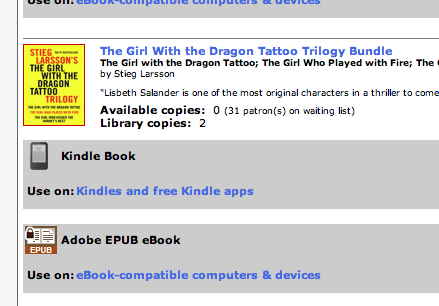 I bought this trilogy for my Nook — it never occurred to me I could get them for free.

At HTMLGiant, Mike Meginnis wrote a really interesting and well-reasoned post about publishers who price eBooks higher than paperbacks. The NYTimes takes up a different question in this article.

Part of the reasons publishers allow libraries to lend their printed books is that it requires some bother for patrons to get a copy; a person has to go to the library at least twice. But if you can check out an eBook from your couch as easily as you can buy one, who would ever bother?

The article goes on:

And print copies don’t last forever; eventually, the ones that are much in demand will have to be replaced. “Selling one copy that could be lent out an infinite number of times with no friction is not a sustainable business model for us,” Ms. Thomas says. Hachette stopped making its e-books available to libraries in 2009.

It’s a fair question. People in my family actually consider it financially irresponsible to buy books when the library makes them available for free. But how much of the burden should publishers have to bear? Libraries are public. Should publishing be made public too? Imagine such a world.

The article further notes an interesting point that becomes relevant for small presses, who don’t have the luxury of protecting best-sellers: since mainstream publishers aren’t distributing eBooks to libraries, small press titles have an opportunity to get attention where they might have otherwise been overlooked.