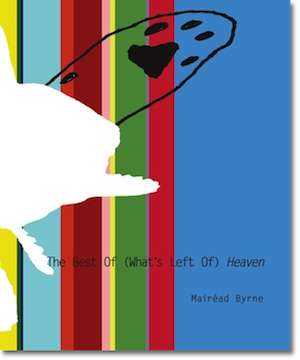 The Best of (What’s Left of) Heaven

Advance praise
I’ve had to replace my copy of Talk Poetry more than any other collection in the last couple of years – it’s walked out of my house every time I’ve shown it to someone – and I’m preparing for the same thing to happen with The Best of (What’s Left of) Heaven. I think the thing I like most about Byrne’s poetry is that it makes me laugh like a monkey (baring my teeth, mad with fear, involuntary, like something being electrocuted) and like a human being (subsiding into my chair, telephoning someone to read it to them straight away) at the same time. Whether you open it on an imagistic collage or a coruscatingly funny interview, whether a hymn to the act of creation or furious, lyrical invective, it’s a beautiful, angry, generous collection and if you don’t like it you’re a fucking idiot.
Luke Kennard

Mairéad Byrne’s poems are moving microcosms in which a keen power of observation and playful imagination fuse with the minutiae of daily life to create small missives of quirky and insightful documentation. Her source material includes everything from the weather to credit card bills to news reports to human body parts to animal pelts and all of these seemingly disparate details amass into a kind of living, breathing envelope that holds the marrow of existence itself in all its harsh reality, weird surreality, absurdity, fragility, and occasional beauty. Often funny and sometimes sobering, Byrne’s work exposes the difficult-to-reconcile distractions, detritus, and rubble that surround us from all sides, but also culls glowing artifacts from such debris.
Juliet Cook

A modest ma(s)terwork of colors & delights, of plays of language (lost & found), the push & pull of parody, of politics & domesticities, of day to day conundrums, of observations & inventions, of the connection (as she has it) of “small things to other small things,” of the oft-derided fancy as the brighter sister of imagination. These are some thoughts that flash by while reading Mairéad Byrne’s agile, humoristic, & deceptively profound new book. The best of, surely, & with a promise of still more to come.
Jerome Rothenberg