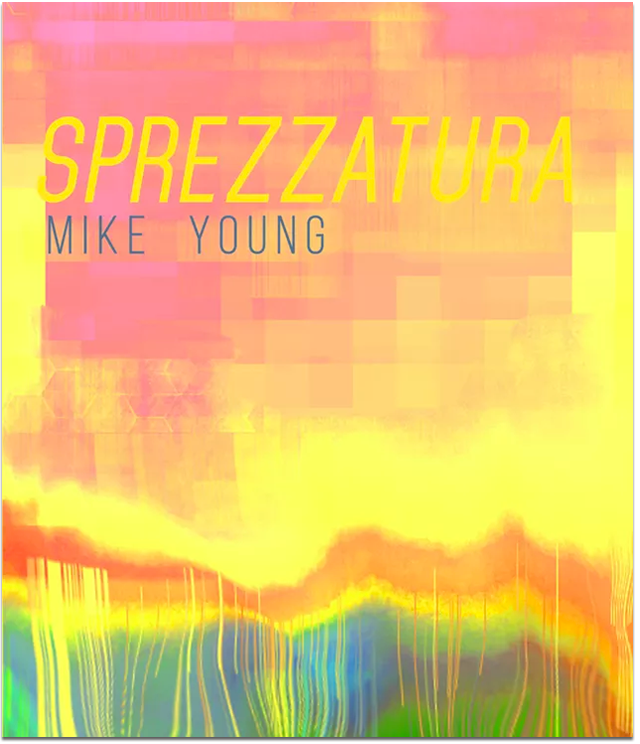 Mike Young’s bristling book is about love and fear and money. How do we know our feelings and feel our knowledge? It’s about stupid contemporary immune systems and being left to our own devices. If you’re on a bus or plane, you’ll be happy to hear there are a lot of those. Rollerblading, Lord Byron’s clubbed foot, pyramids, falafels, bridges, trains, buses, nightshade, mustard, tattoo, antlers, innovation, nerves, guilt, blood, strawberry cops, conclusive gameshows, moody strangers, and “the yes that keeps watch / over and under my breath.”

“.. Pleasingly disjointed, dream-like, with gaps in continuity that, instead of leading to incoherence, illuminate the power of spontaneous language to scratch the underbelly of meaning.” —The Rumpus

“Reading Mike Young’s poetry is like being given a pregame speech in another language. Afterwards, you feel like you can do anything, as long as you’re nice about it.” —The Journal

“Young has some vaudeville in him, some Harmony Korine-like want for entertainment in the everyday, but perhaps the best thing about his work is the way that it seems like an insanely huge sponge made out of eyes and ears, vacuuming up the moments that most often disappear, and cobbling together monologues that carry their aphorisms in the same arm as their jokes … I’ll even go so far as to say Mike Young is the Dante of post-boredom.” —Blake Butler @ VICE

“Young, in his poems, might be pointing out how quick we, not just as people, but as poets / writers / young men listening to songs, can be to declare feeling rather than explore feeling and all its terror …Young’s poems are always turning, carefully and darkly, to the strange or to detail (the small, deep portal) as hair trigger / explosion …Mike Young has always struck me as utterly brave / a poet, who like Frank Stanford, throws knives at the ceiling fan and calls it sweat.”—Carrie Lorig @ Entropy

“Without a work like Sprezzatura, which calls out all our efforts at seeming rather than being, we would go on imitating ourselves until all that remains is, I don’t know, a list of online profiles maybe.” —Daniel Scott Parker @ Heavy Feather Review

“Sprezzatura navigates, rearranges and refracts the precarious naiveté of being human into something fun and worth aspiring to … True to its title, the playful craft of Mike Young’s poetry does execute a kind of trick: progressing from levity to solemnity and back, creating distance only to later extinguish it. Its poems conduct a series of experiments; they bring us closer to what we love and the absence we feel when we cannot possess it.” —Lucy Tiven @ The Fanzine

“Mike Young doesn’t fuck around—but does he? This collection will make you pause and think things like “Wow, it’s great to be alive” but also it will make you think, “I wonder what the weather’s like in Switzerland right now?”” —Laura Relyea @ Vouched Books

“A bubbling concoction of Attention Deficit Disorder, social media and streetcorner philosophizing … In a way that is at times reminiscent of John Ashbery’s, Young’s language is fairly ordinary word by word, but the phrases pile up like cars careening on an icy highway…” —James Heflin @ Valley Advocate

“Mike Young’s second full-length poetry collection invokes and enacts its very title—Sprezzatura, that studied performance of nonchalance, seemingly without effort, provides a substantial series of poems that fully engage. A mish-mash of what appears to be overhead conversation, remembered lines, and everyday experience comprises the majority of these poems that ask to be spoken aloud …Within this one, long, fluid dialogue of poems, Sprezzatura works as a chatty and lively collection, one where the reader should feel unabashed to talk back.” —Alyse Bensel @ The Los Angeles Review

“Why can’t modern poetry have a sharp wit and be ultimately entertaining? Young’s poems carry their own poignancy without visible complication. Seemingly effortless lines perfectly descend in easy nonchalance.” —The Esoterrorist

“My favorite books of 2014 as far as i can remember were sprezzatura by mike young & hill william by scott mcclanahan … sprezzatura i found myself halfconsciously repeating phrases from in my head (normal for me), reciting bits & pieces of out loud (less normal b/c less socially acceptable) & even accidentally memorizing the first poem of (dont think ive memorized a whole poem, intentionally or otherwise, since the 4th grade).” —Oscar Bruno D’Artois @ Shabby Doll House

“[Young’s] poems here start with the aphoristic (“If you think everything’s rendition, you’ll never much experience,” or “To be present in the world doesn’t make you a present to the world.”) but then they quickly go effervescent, like a grade school science fair volcano, frothing over with coffee-and-hazelnut candy, the invention of beauty, co-dreaming, the immediacy of toast, lunchmeat and samosas, dancing fish.” —Spencer Dew @ decomP

“And it’s funny because it’s a complex, privileged, complicated, fucked up feeling, but also a beautiful feeling, a pure transparent observer, a node through which life passes, being the air being eaten, the foot and the standing, etc. etc. And Sprezzis maybe more than anything about how that’s a feeling that gets interrupted in good and bad ways by love and fear and money, and you try and fail to gracefully contort to allow those things to pass through too, but they don’t, they get stuck, and you get sunk, and complexities pile up, and the world piles up indifferently too, indifferent because it’s nothing but difference, and there you go and go until you don’t.” —Noah Cicero & Mike Young @ Enclave