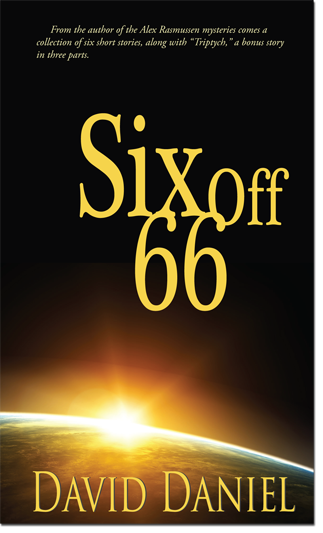 Six Off 66 by David Daniel

Six Off 66 is one part old-timey radio announcer, one part Reader’s Digest condensed book, one part Jack Kerouac. Here you’ll find no kind of pyrotechnics. You will find plenty of the varieties of mystery that snake into your sleep on a snowy winter in Vermont or New Hampshire or Massachusetts. The news of the world—the trucker that comes upon that thing in the road near Ayres City, say, or the way the Japanese take their baths on Pearl Harbor Day—dwells among the fragments of experience that mean sideways things you know but can’t articulate: that black-and white land camera you hold in your hand in the hour before you board the Lone Star Limited southbound for Texarkana, that Chinese dogwood Paula saw and said was beautiful, that day Kenny said you smelled like a French whore. David Daniel’s milieu is pure Americana, but his sensibility is something stranger and vaguely European. If the setting were changed to Budapest or Paris or Prague, we’d know what to do with these stories. Instead, we’re left to reckon with the categoriless thing that sits at the intersection of oblivion and I-495. Let the reader beware.
—Kyle Minor, author of In the Devil’s Territory

These stories are beautifully written, as hard and glittering as diamonds. But it’s in their strangeness that we recognize the vagaries of human nature—that we recognize ourselves.
—Jay Atkinson, author of City in Amber and Tauvernier Street