Stephanie Barber offers some thoughts about her new book, Night Moves, a compilation of YouTube user comments about the Bob Seger song of the same name. 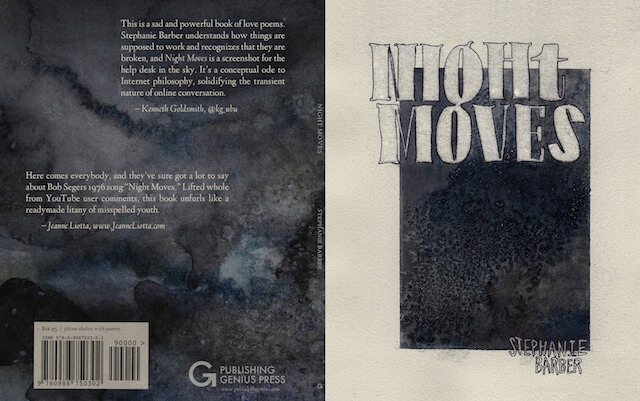 This book is so conceptual. Should it include an introduction or an explanatory note of some sort?

I think the temptation is to couch it in explanation but I think it would be stronger not to. I’d rather not have an essay at the beginning of the book because that seems a bit insulting and programmatic. In an ideal world there will be a really broad array of reasons why people might be interested in a book like this. I’d rather not push them into my notions so quickly.

The book makes me feel sick to my stomach.

I understand why it would make you feel a bit sick. It doesn’t do that to me, or rather it does and then, the next moment it changes its tune and soothes with kindness and insight. But, yes, of course I see what you mean. And actually that is what is so great about it. (Or one of the things I think is so great about it.)

One reason for this anxiety is simply that the text is constructed by people from so many different ages and economic levels, etc. The ways that people speak and spell and the (sorry) crudeness and stupidity of what some people say is socially and existentially shaking. It’s like, well, I’m just hoping the humans step up their game—cringing, like “please don’t say anything else ugly.” And they do! And then the next moment a pile of wise and empathic pearls spill out. It is dizzying, the speed and precision of the vacillations. A dizzying, wild and very precise sociological artifact.  But yes, there is some sickness. Something in here about Plato’s philosopher kings, his distrust of a government in the hands of “the people.” Who are the people? Wow! What are they doing?

Yes, there are all kinds of people and attitudes represented here. I like the comment that is something like “83 people are diurnal,” which is a little smarter than I expected.

Yes, that line is smart formally (if we imagine the participants (the commenters) were aware of how the ‘narrative’ would unfold, like the most sensitive improvisers!) and it is smart linguistically, a sort of pun on the entirety of both the song and the discussion.

So what did you do? Did you edit the comments or anything?

No, it’s not edited (though we did remove the attributions). I was tempted but that goes against the whole spirit of the project, which is the recognition and celebration of a very ubiquitous collaborative critical inquiry that is happening on YouTube or Facebook or any online community where people share and comment and discuss in a public way. I made a video in 2011 that uses the YouTube comments from a television show as a visual element. In this piece, “Tatum’s Ghost,” I did edit and amend and add to the comments. I took out some of the truly cruel comments and added a lot of lines to sculpt the experience more concisely and that felt right for that piece, but this is a different and more comprehensive analysis or simple “framing” of this phenomenon.

Yeah, so many reasons and then, also, just chance. My car has no way to play music except for the radio and even there the pickings are slim. I get just the largest signal stations (hip hop, classic rock, new country) and I cycle through these three,  alternating between joy and stoic martyrdom. I think I’d been listening to that song and wondering just what the appeal was and went home to look up the lyrics and sort of stumbled upon this litany of considerations. As a song it is philosophical and perverse, genuinely moving and cloying simultaneously. Musically it is tedious but somehow ‘effective’ in the way of a satisfying mathematics. His performance is believable, attractive. The topic is very, very heavy. The song is about nostalgia and sex and mortality. When Bob Seger writes “autumn closing in” he’s writing about the end of his life nearing. The dreaming back to youth and sex is so intensely SAD and universal and frightening and in these comments people are doing a little bit of their own philosophizing and wandering down their own nostalgic paths. It is so intense (and I think that too causes a bit of the sick-making anxiety, the cringe factor of the unschooled philosophizing.)(Which, you know, I LOVE!)

A few days ago I was speaking to a friend about this project and we were talking about a sort of pre-nostalgia that is implicit in the creation and reception of the original song. I mean, Bob Seger was not very old when he wrote it. Autumn was not quite “closing in,” was it? And my friend, Mark, when explaining how much he hated the song remembered his older brothers loving it when they were young teenagers and how could they be able to empathize with the suggested narrative of an older man remembering the sort of existential virulence suggested? What was the attraction?

How much do we really empathize with pop music?

Pop music is a very strange and particular form of art because it shrinks and expands beyond the merit of its music and lyrics. It’s almost alchemical. Pop songs are music, performance, poetry and both a sociological gauge and creator. (And certainly there’s no denying the element of economic machinery beyond a song.)

But putting aside the ambient nature of music, the way we are able to move through our lives and entwine the reception of music with our daily sad and joyous activities colors and impresses the way we actually ingest the piece. This is, of course, all music, but pop music is what you will experience without choosing to. Supermarkets and thrift stores and radios and you know, it is our country’s most prevalent, consistent and considered art form.

Anyway, back to Mark’s teenage brothers, when Mark was an even younger teenager, they felt the also-young Bob Seger’s preemptive fear of aging and death and mourned, with him, the memory of young sex (which they may not have even yet had!) and, though this confounds all logic, their empathy is wickedly earnest.

Yes, I love when they speak about the merits of the song in terms of its language or musical chops.

One of the wonderful things the comments posters do is discuss art. They are thinking primarily about nostalgia, their own sex or mortality and then ART! How terrific! It’s almost like the Situationist graffiti campaign of the late 1960’s. (It’s hard for me to speak about this sort of mass media artifact without thinking about Debord I guess–obviously his thoughts on the spectacle creating the individual are intensified by online communities.) Internet graffiti for absolutely no purpose but to share and consider each other’s views on these topics. How many spaces are there for this public armchair theorizing?

But here again, back to your anxiety (sickness) … yes …OK … I guess people publicly mourning for, or waxing poetic over, their early sexual experiences is incredibly tender and fraught but has an oft triggered ick factor that causes anxiety but also is WOW to me, so cool. So moving to hear. Sometimes truly sexy–like the woman who says no one ever kissed her the way that Jerry Sinor did. It’s a really surprising and beautiful moment. And I like sex having an ick factor anyway—isn’t that why it’s sexy? Yes, I know there are some nudists in Vermont who find it only natural and beautiful (… ultimate ick!).

What is it about the form of the comments?

Formally it blows me away, the way it is all somehow spatially visual. Like, how can I say this? The lines that seem to go together (when one poster comments on the comment of the previous, etc.) are little runs, right—but for the most part it is all, somehow, happening at the same time. I am thinking about Gotthold Lessing who, in the 1760’s wrote that visuals are all, essentially, static and simultaneous (as opposed to the temporal and linear unfolding we experience with the written word). This book, and YouTube comments in general, seems to exist in this visual way (though of course we still need to travel through the written word temporally). They are often not responding to each other, they go in and out of integration with the exquisite corpse text they’re constructing and focus, almost primarily, on a sort of selfish and removed interaction with the song (or video) they are thinking of. Through a negative lens it’s like a cocktail party with people that don’t listen to each other and just keep saying what they are thinking about regardless of what anyone else has said. And then, also, I can see it as a Miro or Cy Twombly, Cecil Taylor (his piece Stepping on Stars)—intergalactic, cluttered and sparse simultaneously. Energetic in it’s philosophical stasis. (I mean the redundancy of the conceptual offerings creates a static review of how people feel about these ideas: music, sex, mortality). It is so formally MODERN! Like all of the simultaneity being realized through contemporary quantum physics. It’s all in the eternal NOW but it is all about NOSTALGIA! Really it is nostalgia and then it is also about nostalgia. (That too is awesome.)

Also, formally it is almost an epistolary poem. All these letter snippets sent out to an imagined reader which is, I guess, what a song is too. And in some way sex is a letter too. Yes. Really. 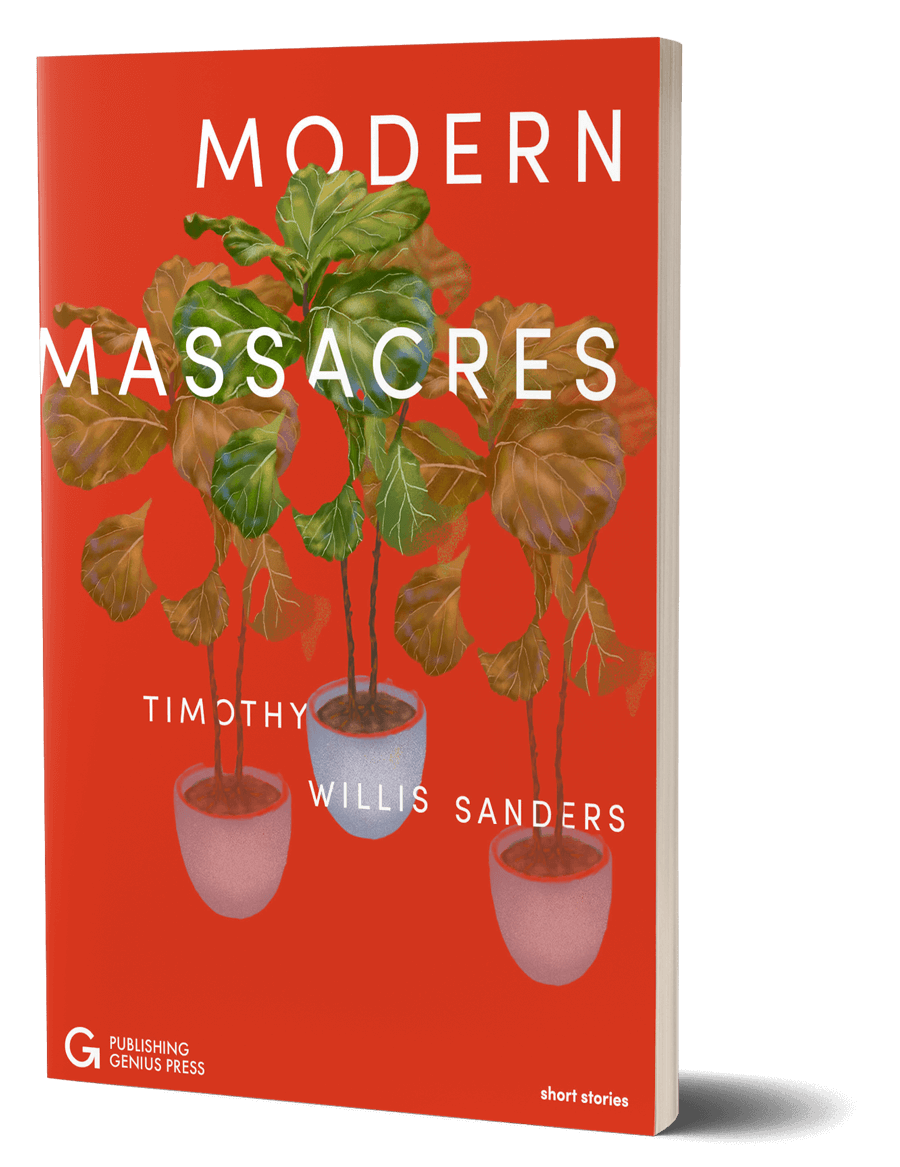