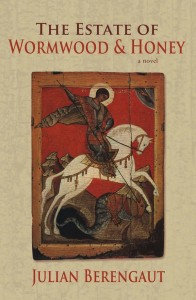 The Estate of Wormwood and Honey, Julian Berengaut’s excellent novel about life in 19th-century Russia, came out yesterday. It’s an interesting book about a young man named Nicolas who, as a child, was spurned by his family and sent away from his home. Ten years later, after distinguishing himself in the military, he reunited with his dying father and returned to the estate, where he gets retribution and deals out justice and establishes himself as the rightful heir. There are a lot of fascinating characters and rich details about what life was like at that time, in that place. Berengaut writes with clarity and a keen understanding of the era, which almost makes the book a necessary companion for reading the Great Russians like Dostoevsky and Tolstoy.

I asked Julian about what it was like to write such a book.

1. For aspiring writers, can you list some of the first steps you took when you were just getting started with the novel? Also, what are your writing habits?

It felt like the most daunting, practically impossible, task. But to begin, I imagined the story as a movie and then I said to myself: “OK, can I think of, say, thirty or thirty five scenes, each about 3 minutes long, that would make up the movie.” (With 30-35 scenes of 3 minutes one gets a 90-105 minutes feature). Then I started to write out what these scenes would be about. That listing of scenes became the outline of the novel. Of course, some of those 3 minutes scenes would now, fully written out, take much longer.

As for my writing habits, I try to write. When I run out of excuses for not sitting down at my desk, I try to write 250 words. Then, if the gods are kind, I continue. If not, I stop. The next day, I look at it and delete it if I can’t imagine anyone liking it. I find that it is better to write and then delete, if necessary, than to sit around and wait for true inspiration.

2. How did you get the idea to write The Estate of Wormwood & Honey?

I am going to sound outrageously presumptuous and say that it came from thinking about Pierre Bezukhov—a central character in War and Peace. He is an illegitimate son of a very wealthy nobleman and in the early part of the novel he becomes his father’s heir and, overnight, changes from being a complete nobody to becoming the master of all of his father’s estates. The thing that bothered me is that while Tolstoy tells us a lot about the father (in fact, historians can pinpoint exactly which historical figure he was based upon), we never learn anything about Pierre’s mother. I imagined a story that would fill out that gap using parts of the personal story of Alexander Herzen, another great Russian writer.

3. Can you remember any hurdles or obstacles you faced while composing the first draft? How did you get beyond those obstacles?

I’ve found some parts of the book to be very difficult to write; especially parts involving pain, humiliation, and suffering in general. I felt they had to be included but my early efforts were unsatisfactory, as the early readers of the draft universally agreed. I had to develop a way of talking about it that was true to what I had to describe but also stood at some distance to make it bearable.

4. Of course you make the motivations and anxieties of Nicolas, the main character, very clear, but even minor characters in the book are portrayed vividly. The Governor-General’s wife, for instance, starts out seeming like nothing more than a social-riser, but later you instill her with a lot of sympathy. I’m wondering, were any of the minor characters more fun to write than others?

Oh, I had fun with quite a few of them: Vera, the alcoholic housekeeper, who prefers the simple moonshine made by local peasants but, if necessary, will also drink the noble wines of his master; Mitka, the thieving estate steward, whose shenanigans come to a crashing end; his long-suffering wife.

5. How much have the characters stayed with you after finishing the writing?

Much more than I would have ever expected. In fact, they keep asking me to continue the story, and I feel it would be very difficult to say “no.” Joseph Conrad somewhere warned authors against showing favoritism towards their characters and I agree with him but I still think that Tatyana came very late in the novel and that, in any continuation of the story, she deserves and will receive a more central billing. 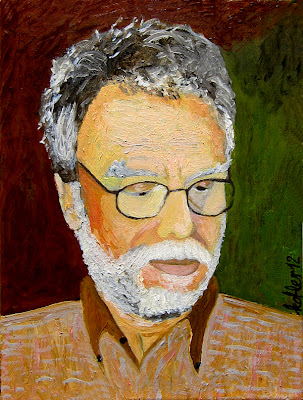 6. This novel does such a great job of characterizing provincial 19th century Russia, even down to what the sidewalks were like. What would you say is the biggest difference for a resident of Ryazan then, versus today? Is that a ridiculous question?

No, it is not a ridiculous question at all; in fact, the subject of continuities and discontinuities in Russian history is endlessly debated among historians. Thinking about life in provincial Russian cities in Gogol’s time and comparing it to our time, the one thing that stands out is access to information. Kids in Ryazan today watch YouTube like everyone else. Whether it changes anything deep is another question.

7. Your bio notes that you were an international debt negotiator. Do you think this sort of career influenced you as a writer at all?

It is hard to say. On the one hand, reports I used to write about debt negotiations were nothing like the novel. On the other hand, there is something in the novel that can be traced to my experiences of seeing once-proud governments who overspent and over borrowed and then had to discuss every penny of their budgets with a bunch of cold-hearted accountants.

8. In his blurb of The Estate, Joseph Young notes the amount of imagination it must take to write a novel so far out of your experience. The book is about events that happened almost 200 years ago, in a land as far away geographically as it is from our common experience today. But you grew up in Europe—would you say this gave you some kind of understanding about the plight of the residents of Ryazan? Have you ever been to Ryazan?

I’ve been to Russia many times and I know the language. I visited quite a few provincial Russian cities, though not Ryazan. Interestingly enough, my father spent part of World War Two in Ryazan and I remember some of his stories.

9. I know you’re traveling a lot now. What are you bringing with you to read?

I end up reading a lot of nonfiction. Right now, I am reading a biography of Arthur Koestler by Michael Scammell. It is excellent.

10. Completing a novel is a major feat (so much so that the artist Cory Arcangel has created a twitter feed that just collects tweets that mention “working on my novel”). I’m wondering if you can pin down what has been most important to your success? Would you say your experiences are more fundamental to your work as a writer, or your reading habits? Have you taken writing classes or workshops that helped you?

I participated in a number of poetry workshops and they were helpful in terms of helping me to validate to myself my own voice. In terms of completing any novel, I agree that it is a major feat. In my own case, the critical realization was that sitting on a draft that was, in one’s own assessment, 95 percent complete hoping that one day I would be able to get that 5 percent done won’t get me anywhere; the right thing to do was trying to connect to a good editor. Then I was able to realize that the 5 percent was already there but another 15 percent I didn’t know about was not. As for experiences vs. reading, it has to be both even for historical novels; perhaps especially for historical novels.